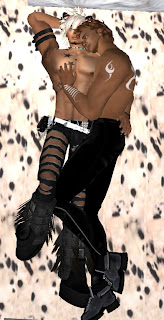 Well the last few hours of last night seems just like that, a roller coaster ride of emotions, filled with highs and lows, twists and turns, with mah heart pumping in mah chest. I'm still a little dazzzled by it all.
I wuz waiting for mah Very to log in, so while waitin I dropped in by Boots beach for a little chat n dance. Met a guy who's-name-I-don't-remember but just remembered his tshirt which had "So many kittens, so little recipes" printed across it. Course I didn't take it too seriously, and with a grain of salt I saw da funni side of it. The others started coming up with neko themed dishes like neko-con-carne, neko fricassee but as for me I prefer to be served covered in chocolate and have it slowly licked off =~.^=
Nevie dropped me in IM. He sounded so hurt that I had to send mah bro a hug and several licks. I had thought he was still hurting from the disappearance of his partner Ian but there was a fresh wound cut into his heart. His "brother" and "friend" Rickie Z had defriended him, kicked him out of his groups and may have had Nevie banned from a couple of clubs. All becuz Nevie wanted some some time and lovin to himself, and for that Rickie labelled him selfish. Now of all the time I knew Nevie he is a sweet, kind, adorable kitty alwayz giving of himself and his time to others who had need. At least now Nevie have seen who Rickie really is. I'm not gonna go further into this. Refer to Franzi's blog if you must for more details of what Rickie and Quag had both done to mah bro. I can't help but wonder who else is on their target list next. But now lets cast our minds on happier events.
My sunshine arrived a little later than he had promised but I don't mind at all. Everything seems to fade away when I'm in his presence. The sand and sounds of Boots beach faded away and all I could do is leap into Very's arms and hug him, purring and not wanting to let go. Headed to our brother's hangout and climbed into the hammock by the water's edge, my beloved next to me, his touch sending shivers down mah spine, his scent intoxicating me, we lay there talking, nuzzling, kissing. Time seems to stand still and yet it flew by. I had a burning thought in mah head and needed to get it out. I had thought about it the last couple of weeks but would it work out between the two of us given our busy RL schedules that we have hardly anytime to meet? Would Very marry me? I had to find out. It's nearly midnite. I dropped the question on him and held mah breah....Very reponded with a big YES! I'm about to burst, feeling so light headed, so happi...OMG, OMG, OMG! 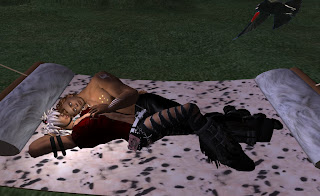 After a little while longer of more purrrrrrs and kisses we both had to head to our own beds. My sunshine logged off but I still have da biggest grin on mah face. Out of da corner of mah eye I spotted 2 figures drifting down on parachutes. What a sight. Franzi wanted me to meet his Kenshi's brother Mick. Hmm smexiness does run in da family. Our new brother Leucetios Snowpaw also dropped in. Pity I couldn't stay, too tired and too happi. Time to head to dreamland. Zzzzzzzz. 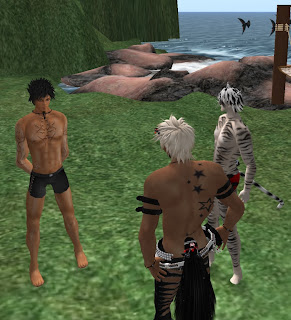 Note: On the 4th March Very Goodliffe proposed to Justyn Maurer, both running off into the night to elope:
Justyn,
I Love You. I want to share my Secondlife with you. Babe, you mean everthing to me. As I said last night, you are the stars that twinkle in my night, you are sun that warms my soul.
Love Very
Posted by Justyn Maurer at 8:09 PM

All the very best for your life together.
May all the stars shine for you together and the cherry blossoms bloom in your hearts
Love you both... Ras.